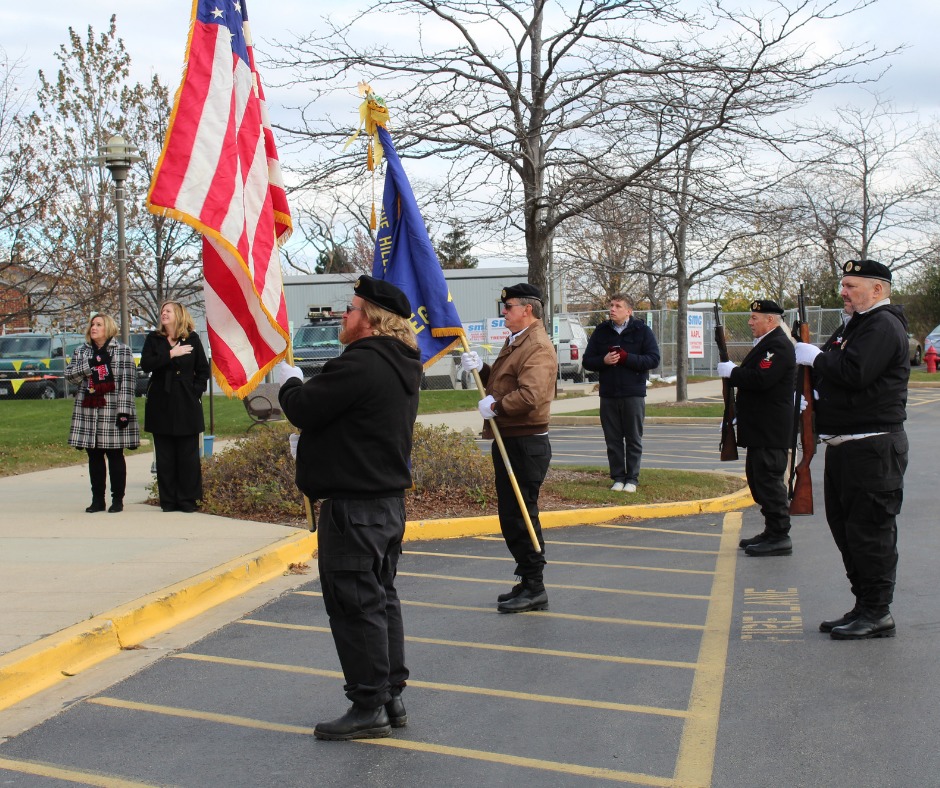 This month, stop by the library for some special programs and events to honor the men and women who served in our military. Together we can honor the sacrifices made in the name of freedom and justice.

Veteran’s Day Ceremony
Monday, November 12 at 10:30 am
We welcome members of Algonquin-Lake in the Hills American Legion Post 1231 as they raise the colors in honor of Veteran’s Day and the National Anthem is performed. Enjoy cookies and coffee with veterans and other community members.

Gallery
November – December, we will feature the artwork of local artist Jeanine Hill-Soldner, who is bringing selections from her “Portraits of American Veterans” project. She will be sharing her original oil paintings of local American veterans with their photographs and stories.

White Table
November 12-16
This week you will see a table set in our lobby with a white cloth, a black napkin, a turned over glass, a white candle. a lemon and slice and grains of salt on a plate, one place setting, and a red rose in a vase with a red ribbon — all symbols to honor the men and women who served in America’s Armed Forces. Originally designed as a Memorial Day display, we’ve expanded the White Table tradition so that we share our Veterans’ devotion to and concern for their fallen and missing comrades.

Over There-America in World War I – Harnish Main Library
November 4, 2 to 3:30pm
One hundred years ago American troops returned from the First World War. This insightful multimedia presentation will examine the fierce political battles in America as we debated whether to abandon our long-standing policy of military isolation. Next, we will look at how American soldiers turned the tide of War while the American home front was challenged in unique and important ways. Finally, we will look at how the end of the War changed America and ultimately set the stage for the rise of Hitler.

For Genealogy and Family History Buffs

Participate in the Illinois Veterans History Project! Launched by Secretary of State Jesse White, you can help build the permanent record of the names and stories of Illinois war veterans and civilians who served our state and country during war.

For the Good of Your Community

Be part of “Veterans Grow With Google,” a recent project to help you locate veteran-led businesses around the country and in your neighborhood. Because when veterans thrive, the community thrives.