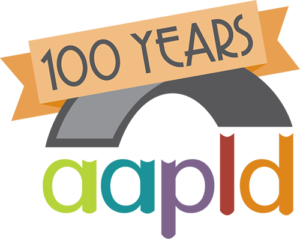 February 23, 2021 marks 100 years since your Library doors opened to the community, and we\'ve been providing services ever since. Organized and established entirely by the members of the Algonquin Women\'s Club, the Village Hall council room on Main Street was the Library\'s first location, with just 265 books and an established $600 book fund. Now, AAPLD circulates over 600,000 physical and digital items and receives more than 250,000 visits a year!

Fill out our digital passport through Beanstack throughout the rest of 2021 to earn special prizes by doing library-related activities, such as reading or attending a program. Track easily online with the same log in as your Summer Reading account!

Each month, our programs will cover a new decade, spanning from the 1920s to present. Enjoy entertaining storytimes for children, crafts for everyone, or informative seminars for adults. See what's coming up next on our online calendar.

Each week on social media, we'll be posting a memory of the Library and the community for everyone to see. We'd love to hear your stories about our great community. Send a photo and a story of your memories of the Library (the older, the better!) to [email protected].

Today’s Algonquin Area Public Library District circulates more than 900,000 materials and receives more than 300,000 visitors every year, but it all began in the Village Hall.

Founded by members of the Algonquin Women’s Club in 1921, the Village Hall council room provided enough space for a few library shelves. Original donors contributed 126 books and established a $600 book fund. At the time, Algonquin businesses agreed to donate $1 per month in support of the new library, and the Library became tax supported in 1925.

Erma Taylor served as the first Librarian. George D. Keyes, Helen S. Rattray, Ella M. Kee, S.W. Bond, Fern Miller, and Fred Duensing comprised the initial board. Many of these family names may seem familiar, as multiple generations have resided in the area.

To better serve the entire community, a referendum passed in 1962 to create the Algonquin Area Public Library District (AAPLD), a 14-square-mile area encompassing Algonquin, Lake in the Hills and Haeger’s Bend. Today’s AAPLD covers more than 30 square miles and includes portions of Cary as well.

The Library continued to function in the room above Village Hall for 50 years and completely filled all available space. In December 1973, the Algonquin Area Public Library agreed to purchase a site on Eastgate Drive for $37,000. Building discussions ensued, and by June 1975 voters approved a referendum to build a new 16,000-square-foot library for $595,000.

Over the next 23 years, the Library’s collection expanded another seven times its size…without nearly enough space to house it all. A $7.8-million bond issue was passed in 2000 for the construction of a new library facility just west of Jacobs High School on Harnish Drive. The 35,000-square-foot facility opened October 15, 2001.

Throughout AAPLD’s history, our trustees and volunteers have represented an impressive array of backgrounds – from doctors, teachers, attorneys and shopkeepers to pastors, retirees, homemakers and business professionals, and we continue to celebrate every community member the walks through our doors each day.

The Algonquin Area Public Library District creates opportunities for enrichment and enjoyment by offering traditional and innovative services, resources, and programs for the community.